On Human Rights Day, Bristol Mind is one of 155 groups across the UK Celebrating 70 years of human rights protection and calling on the Prime Minister to safeguard our freedoms here at home.

Human Rights Day, held on 10 December each year commemorates the dates the Universal Declaration of Human Rights (UDHR) was adopted by the United Nations General Assembly in 1948. This year the UDHR turns 70, a milestone in human history, the first document, after the horrors of two World Wars, which sets down the rights and freedoms every single person should have, simply because they are human.

155 organisations from across the UK have joined together to write to the Prime Minister and urge her to safeguard human rights here at home, particularly in these uncertain times of Brexit. The organisations include those working with new mothers, children, carers, people with learning disabilities and mental ill-health, women experiencing violence, migrants, older people, and groups campaigning for LGBTQ+ rights, fair trials, access to justice, decent housing and against racial discrimination. Together with traditional human rights defenders such as Amnesty International UK, Liberty, Justice, Human Rights Watch, and Rights Watch UK. 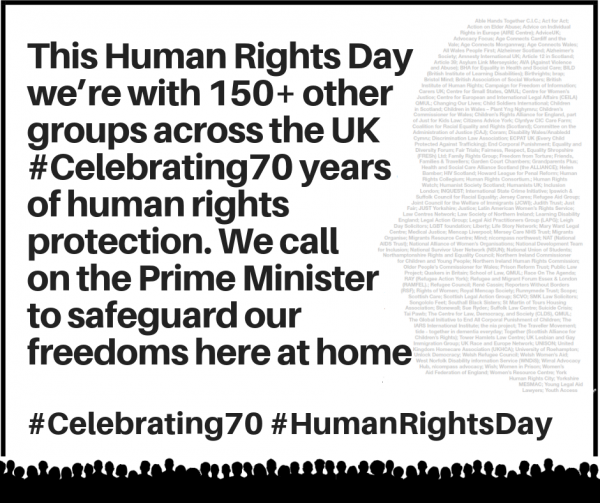