Mind home › blogs › Blog: Is Anybody There? An experience of hearing voices

As part of our mission to raise awareness and dispel misinformation around mental health issues, we’ve been hearing from supporters, staff, and volunteers about their experiences of mental health issues. Today’s blog is on the subject of hearing voices.

Have you ever heard someone call your name and then found there was no-one there? This is a common phenomenon – about 75% of the population have had a one-off experience of this kind. For many people, it will never happen again; but for about 3-10% of the population, hearing voices – medically known as “auditory hallucination” – is a regular occurrence. 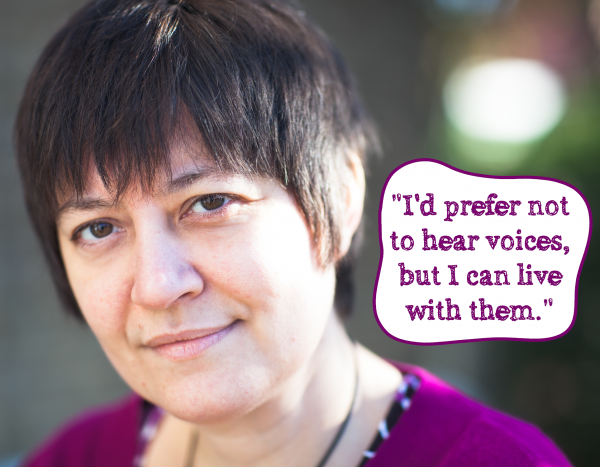 If you have ever heard a voice, were you alarmed when you heard it? Professor Marius Romme describes this as the “Startling Phase”, where the voice hearer is shocked by the experience. For many, it settles down – the hearer can form a companionable relationship with the voices they hear, or even take comfort in them. It’s common, for example, for people to hear the voice of a lost loved one, or someone they know. What matters, according to Romme, is how the individual reacts to the voices – particularly whether they are afraid of them – and so the content of the voices can make a real difference to the experience. For some hearers, voices can be persistently negative or insulting, or even be recognisable of the voice of someone who has caused harm in the past – a childhood abuser, for example. Every person has a unique voice pattern – which can make it difficult for many hearers to believe that they aren’t actually hearing that person’s voice.

When the voices are particularly active, it can lead to what mental health services call “psychosis”: when someone may be so absorbed by the ‘other reality’ presented by the voices that they are not completely in touch with the reality we all share. Other types of hallucination can lead to, and be present within, this experience: visual images, smells, and physical sensations among them.

Personally, I first heard voices when I was 5 or 6 years old. There were two men, unknown to me, in my room – at ceiling height, oddly – talking about taking me away. I was frightened, and told my father, who reassured me. I next heard voices in my teens, and they became a problem when I was 19 and was detained in psychiatric hospital for other symptoms of psychosis. I currently hear voices a lot of the time – but as they’re relatively quiet, I can screen them out, and they don’t bother me too much. They don’t get in the way of me doing paid work, or having an active life.

I’d prefer not to hear voices, but I can live with them. My #1 rule is never to act on anything the voices say unless I have considered it properly and decided that it’s a good idea – so if they tell me that I don’t like eating a particular food when I normally do, I will ignore them and eat it anyway. This rule is particularly helpful if they’re telling me to jump out of a window, which they have done in the past.